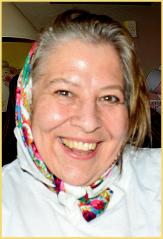 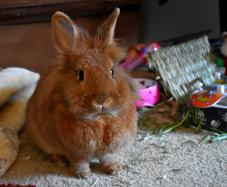 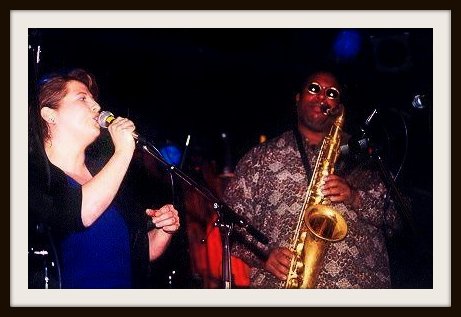 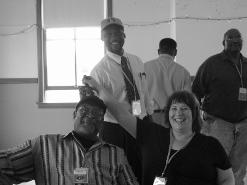 With Wayne Williams (seated) and James Taylor, The Birmingham Sunlights 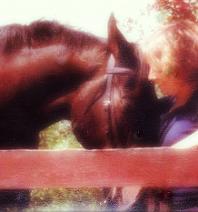 Raisa is a professional storyteller, singer, writer, actor, songwriter and artist who performs across Canada.
She began performing as a toddler Houdini, ingeniously escaping cribs on Sears commercials accompanied by her Irish Setter, Prince.
She was awarded a scholarship and Manitoba Arts Council grant to the Banff Centre in jazz voice, where the New York City Opera further awarded her training.
She has won two Centrum Foundation for the Arts (WA) American Roots music scholarships. There she performed with the Birmingham Sunlights and Bobby Black (The Grateful Dead), and debuted her original blues songs.
She has sung with the Montreal Jubilation Choir, The New Orleans Dirty Dozen, and the Harlem Gospel Choir; she recorded a duet with HGC's Music Director Eric Dozier for his debut album. Raisa narrated the Bravo TV special Art is a Mirror, and was house vocalist at Montreal's Le Bleu Note and Winnipeg's Oval Room.
Canada Council for the Arts has designated Raisa as a professional artist in 5 categories: Disability Arts, Music & Sound, Theatre, Literature and Inter-Arts. She is proud to be the recipient of their Digital Originals grant, under which umbrella she created this site. It is also linked on CBC's website. CBC further featured Raisa on Coast to Coast, an album spotlighting Canada's most outstanding voices.
Her storytelling videos can be seen on this site, and on the venues in the left hand sidebar.
She is the author of Baba's Kitchen: Ukrainian Soul Food, a collection of outrageous stories from Stalinist and Holocaust survivors, including her own family. The Ukrainian Canadian Congress chose Baba's Kitchen for their grand prize package to commemorate the 125th anniversary of settlement. Raisa is also the author of Rosie's Rescue and a self-produced CD, Legends of Ukraine and Canada. National Ukrainian magazine Nasha Doroha selected her poetry to commemorate the Chornobyl disaster.

She has been an instructor for Victoria School of Writing and the voice program at Vancouver Community College. She has been published three times by Chicken Soup for the Soul, was a Features writer for the Winnipeg Gazette and humour columnist for BC Women in Music.

She has performed at countless venues, including the BC Organic Islands Festival, Victoria and Winnipeg Folk Festivals, Oseredok Ukrainian Cultural Centre and many libraries and service clubs.

A protege of Cats and The Nylons bass singer Ralph Cole and Leonard Cohen vocalist Corlynn Hanney, Raisa has taught Free Your Voice workshops for over 25 years independently and for Long & McQuade, and won an award for VIP Hospitality at the international Music West Conference. She has earned membership in SOCAN/ASCAP and belongs to Professional Storyteller, Canada Council for the Arts Public Lending Rights program, CIRA and Access Copyright.

Raisa holds a certificate in small business management from the Federal Business Development Bank, and is available to write grants for artists.
Until she became disabled, Raisa had an extensive career as an equestrian, including training at Spruce Meadows and many years as a therapeutic riding volunteer. She was the handler for the US National Champion Stock Horse Stallion and 7 times CEF Manitoba Horse of the Year.
She  is passionate about wildlife, trees, and animal rescue. Her storytelling to save an urban forest in Victoria was aired nationally on Global TV.

She is particularly committed to ending cruelty against horses and bunnies. She led the successful campaign to take abused carriage horses off Vancouver's downtown streets, and is the national record holder for ink-on-paper petitions to end horse slaughter.

Her best friend is Boryslav Buryak, a grumpy little house rabbit she found wounded and starving on the street, after cruelly being discarded after Easter.

Please adopt, don't shop. At left, rescued race horse Zircon. "Too slow" and bound for a tragic fate. He was a lover, not a fighter.